A downloadable game for Windows, macOS, and Linux

Liberal Crime Squad is a graphical remake of Toady One's game by the same name: http://www.bay12games.com/lcs/. There is a discussion thread specifically for this remake here: http://www.bay12forums.com/smf/index.php?topic=171787.0

The project files can be imported to Unity through the launcher - they were built using Unity 2018.4.34f1, so if newer versions cause problems, that version should work.

This page, as with the game itself, is still very much a WIP.

The project files are now available on GitHub: https://github.com/Alex-McClelland/LCS_Unity

Hey, I've found several bugs (I play on Linux) regarding clips that would disappear between saves, especially clips from found weapons that don't generate extra clips. Sometimes it would just corrupt my save and be unloadable until I open the save myself and find then re-add the disappeared clips by hand (usually it's a .44 speedloader but it can happen with really any clip). Do you know anything about it?

Reply
The Cheshire Cat98 days ago

I've never seen that issue before - does it happen after doing anything specific? I'm also not clear on what you mean by clips disappearing - as in they are registered to a character's inventory but don't load in the save, or the clip in the gun itself disappears?

I kind of got both. Sometime I would raid a place that loots weapons, steal a gun and immediately assign it to a character, everything would go fine until I go back to the safehouse and I get a message like "clip(0123456) is not found and had to be destroyed", the gun remains loaded until I quit the game and start it back to find the gun empty, I haven't managed to reproduce this with guns I've found but haven't equipped to any character.
For the other instance, it's just that sometimes I would load a game and get a black screen, searching the log told me that it was because of some missing item, and I practically searched everyone's inventory in the save file to find out that some character would have clips in their inventory, but the item itself of the clips has disappeared from the save (and it happens often with .44 clips, although it also happened once with assault rifle clips). It happens mostly whenever the game saves following some safehouse raid.

I first thought it was because I have the bad habit of alt+F4'd the game whenever I do something stupid I didn't meant to that have dire consequences (like opening a door when there's conservatives around), but it happened once when I quitted the game using the "exit" button as intended (I just got the notification that one safehouse was being raided by either CCS or the Intelligence, forgot which but not the police). Plus I don't think I'm stopping the saving process this way considering that it would only save once my squad is back from whatever they've done and the next day starts?

I hope these clarifications helps.

This is very helpful, thank you, I think I've found the root of the problem (it also explains why I never ran into it before, I don't tend to swap weapons while on location so I never thought to test it). When a weapon is equipped, it saves its "location" as the entity ID of the person that has it equipped. The issue is that it wasn't updating this information of the clip item contained inside the weapon, so it was still remembering its location ID to be the NPC that originally dropped it, who isn't persisted in the save file so it ends up as a dead reference. I should be able to have a fixed version up later today.

The fix won't be able to do anything related to issues already in your save file but it will prevent it from re-occurring in the future.

How do you check finances? i cant seem to find it anywhere. i want to see income and expenses at the end of month. love this game btw. thank you.

Reply
The Cheshire Cat123 days ago

it would be amazing if you did. great work.

Any interest to port this game to Android?.I think this one better than the original to be ported

I don't have any plans to do a mobile port - I don't have an android device to test on and supporting and updating mobile versions is a bit beyond what I ever had planned for this project.

Any plans for adding conversation hotkeys, or any other interface improvements?

There are conversation hotkeys - if you hit a number between 1 and 6 it selects the speaker, and doing it a second time will select the target. The letters in brackets on the buttons are the shortcut to activate the dialogue choice.

what would your feeling be on a mod. I'd like to mod a opposite/ccs version; but would like permission first, of course.

I've deliberately built the game to be a somewhat mod friendly in terms of adding new items/locations/creature types, although any more substantial changes would require editing the source code (which you are free to do, it's up on github). An opposite alignment version might be more difficult than it seems because there are a lot of hard-coded assumptions of Liberal-ness for the player.

Is this still being updated?

Reply
The Cheshire Cat1 year ago(+1)

I do not have any major updates planned (new features, etc.) but I am still doing bug fixes when something comes up.

is there anyway to add mods?

Modding is sort of halfway supported at the moment. There is no nice interface for it, and the amount you can do without digging into the code is very limited, but all the data files are in XML in the LCS_Data/StreamingAssets folder. Replacing/editing any of these will modify the game content, although changing anything related to world generation requires starting a new game for the changes to be picked up.

Could we get a way to sell multiple (or all) of an item? I'm making clothes to sell and it's time consuming to click for each item made.

That seems pretty doable, I can set it up so that if you shift + click an item stack it will move the whole thing to the sell window. I'll add a similar thing to the base inventory screen when doing base transfer orders.

Hello, I want to add Turkish to the game called liberal crime team, can you tell where the language files are

Unfortunately translation is something that requires altering the source code - it's a thing I'd like to make easier to do eventually but hasn't been something I've gotten around to yet. The project files are available to be modified if you want to take a crack at it but it would likely be fairly difficult because the text is spread throughout the code rather than collected in one centralized location.

I enjoy seeing a classic with some graphics, but hotkeys not working as well as the original made me just download normal LCS instead.

Which hotkeys did you feel weren't working? I tried to match as close to the original as I could, although the dramatic UI changes meant that in some cases it just didn't work.

I think I was just awkward after being away from the game for years. I think in the original you can see all commands on the screen. I found "talking issues" with people to be very time consuming but i probably just forgot the hotkeys
If you are still working on this game I'll reinstall and play around with it.

No I was wrong the hotkeys do not work.  When trying to recruit i need to click both my liberal and the target before choosing issues.

In the normal game you use 1-6 for squad and a-f for encounter.

Also in the original you do not need to specify what squad member if there is only one in the squad.

This makes it pretty much unplayable for me, recruiting is simply too tedious, specially without external mouse.

I love LCS but will stick to ascii version for now.

Also esc should take you out of char screen and in general bring you back towards root menu.  F should  make you "go (F)orth and..."

The ability to click adds a new element, but no interaction should require you to click, if the game isn't fully playable with keyboard only it's sadly unplayable to me, using the touchpad to do most everything is a big source of frustration.

Wow, this is a rare gem. Good work on remaking an obscure, but truly unique game.

Thanks for continuing to update this!

I just found a really annoying bug, if you have too many lovers (in my case 20ish) they will start appearing off the manage liberals screen

heres another on a different save 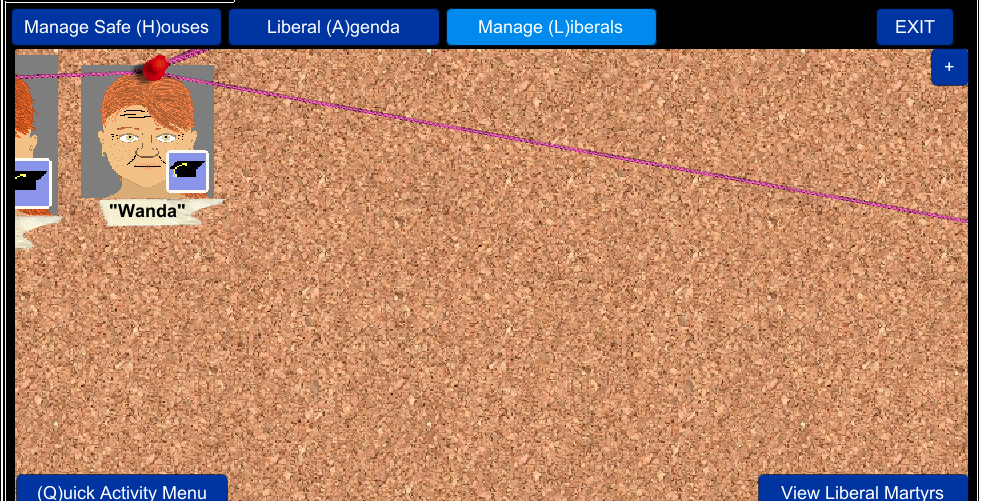 Ah, I can see why this is happening, it will need a fix. The system defaults to spreading out recruits under the person who recruited them but I never quite anticipated one person would recruit this many. In the meantime, you can bring them back to a sane position by going into the save file (which is found in C:/Users/(your username)/AppData/LocalLow/Lazy Dog Software/LCS) and looking for the <Liberal> entry under the person in question. There are two values there, <managerPosX> and <managerPosY>. If you set <managerPosX> to 1, it will bring it back to the middle of the screen.

i'm playing on mac and i can't find my save file

I found a glitch, the fire station / fireman hq doesn't show up until you get raided by firemen

It's dependent on the legal status of Free Speech, so you're probably just noticing it at the same time as you get raided - it won't show up unless Free Speech is at Archconservative.

When your squad meets CCS leader, everyone in squad just instantly dies and then game crashes.

Reply
The Cheshire Cat4 years ago

Can you post a copy of your output_log.txt (you can find it in C:\Users\(your username)\AppData\LocalLow\Lazy Dog Software\LCS) to pastebin so I can see the error message you're getting? I can't reproduce this on my machine. If you can post your save file (found in the same folder) that would also be helpful.

The usage of props at recruitment doesn't subtract from your money. Otherwise it's a great adaptation of the original game.

Nice. Would it be possible for you to release a linux version?

Reply
The Cheshire Cat4 years ago

I can do a Linux build through Unity but I won't be able to test it so I'm not sure how it'll work. I don't use any windows specific APIs so it should be fine. I'll upload it with the next build.

Thank you. Works good so far. 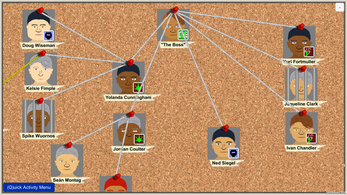 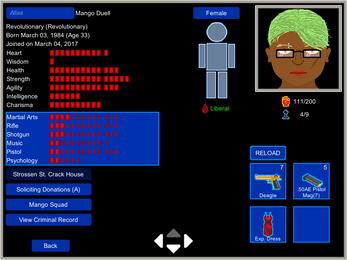 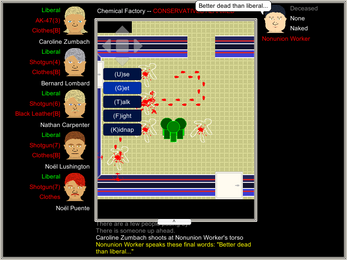